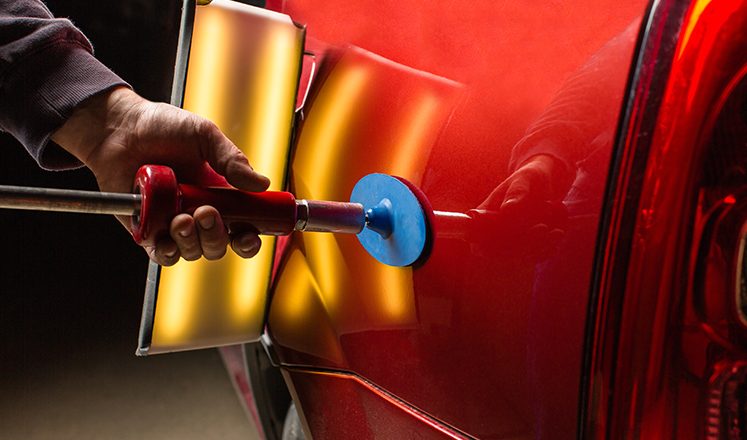 Car maintenance is not only done to ensure smooth running but also for good aesthetics. Let’s face it! There’s a good feeling that comes with driving a cool car, and your vehicle’s appearance is reflective of your lifestyle. But isn’t it expensive to keep your vehicle looking clean at all times?

Don’t panic! There are some cost-effective ways to maintain your car. For instance, when dealing with dents, you can fix it yourself. It’s easy, and we’ll show you how to do it!

How to Pop a Dent on a Car’s Door Panel

The following steps will help you eliminate a large dent on a car door:

Pour a mixture of soap and water on the area around the dent to make it slippery.

Place a plunger on the dent and pop it. Push and pull the plunger until the dent pops out. If it doesn’t, remove the plunger and rinse off the soap.

Step 3: Detach the Door Panel from your Car

Keep a container beside you in which you will put all the screws from the interior door panel. Open the car door and remove all the screws. Once done, use a flat screwdriver and pop open the square covers or the small circle.

Pull the door’s internal panel away along the edges and disconnect the wiring. Now, lift the panel and pull it off the door.

Step 4: Peel out the Plastic Sheet from the Metal Door Frame

Peel off the plastic sheet from the metal door frame and lay it on a clean area. Make sure the adhesive does not touch anything to avoid ruining it.

Step 5: Push the Dent Out

Now, you can push out the dent gently by placing your hand on its backside. Gently increase the pressure if necessary. You may also use a plastic hammer to tap the dent out. Once you succeed, place the plastic sheet and the interior door panel where they belong.

How to Remove Small Dents on your Car

Solution 1: Use a Plunger

The first thing that comes to mind when talking about a plunger is unclogging a drain. But you can also utilize this tool to eliminate dents on your car. Here’s how to do it!

Solution 2: Use Vacuum cleaner and pot

Your vacuum cleaner can help you pull out dents in your car by suction. But you can’t use it alone. You need a dent puller that can provide the right amount of power. The good news is, with a pot and some tape, you’re good to go!

It’s not easy to push out dents on a plastic car bumper because plastics can be very stiff. However, a simple workaround would be to apply boiling water to the dent. Here are the steps to follow:

The heat from the boiling water applied will make the plastic bumper more flexible and easier to put back in place.

Dry ice is a popular cooling agent that is also helpful in removing minor dents from a car. Be sure to wear gloves when handling it, though. Here are a few guidelines for eliminating dents in your vehicle using dry ice.

Solution 5: Use a hairdryer and compressed air

This method is useful when dealing with plastic car bumpers. Here is how to utilize these two popular household products for car dent removal.

Solution 6: Use a specialty tool

You can also purchase a suction dent remover tool or any special tool for removing car dents. There are many options on the market, and they will help you get rid of the dent on your car in no time.

If you’ve got dents on your car, you can remove them by yourself. Not only are these DIY methods easier than you thought, but they are also cost-effective. However, some dents could be more severe than you can handle.

In that case, it is better to accept your limitations and take your car to a professional body for repairs. This way, you will avoid costlier damages that could occur down the road.